Fighting fires is a very stressful, fast-paced business; every second counts when it is a matter of life and death. While professional firefighters are exceptionally trained to get the job done quickly and efficiently, there is a limitation that has been a roadblock for some time – the fire truck itself.

Well, that doesn’t have to be the case anymore. DE Design Works recently teamed up with Phantom Controls to develop the S.A.M system, a fully-automated fire pump signaling the next generation of fire fighting.

A complex machine of valves, pressure gauges, ladders, hoses and more, a fire truck has typically required the full-time supervision of a firefighter to ensure everything operates properly on-scene and water is available when required.

That means out of a team of 3-4 firemen, they are already down a man who can get hands-on as soon as they arrive to the fire.

With the S.A.M. system, that is no longer a problem. S.A.M. integrates electronically with the existing controls on fire trucks to regulate pressure, valves, water lines, accessories – everything that an operator would have to manually control in the past.

With a new efficient, user-friendly digital control panel on the truck and the ability to manage the system remotely from a tablet, the operator is given the freedom to join the rest of the crew.

Instead of being glued to the control panel using a radio to communicate with other firefighters, they can hand out tools, monitor the scene and act as a safety supervisor for the rest of the team.

The idea for the S.A.M. began to come together after Phantom Controls founder Jason Cerrano graduated with a degree in mechanical engineering, but ended up pursuing a career in firefighting. Combining hands-on fire fighting experience with his mechanical proficiency, Jason knew there had to be a better way to manage fire truck systems.

After obtaining several patents and developing the higher level framework for how an improved system would operate, he took the idea to DE Design Works. 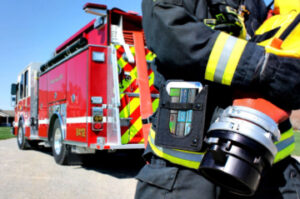 Working with a team of engineers ranging from electrical and mechanical to designers and programmers, they began the difficult process of figuring out how to integrate this sort of system into the existing electronics of a fire truck.

And in addition to figuring out how to make a system that can control every aspect of the truck – a challenging task in and of itself – S.A.M. needed to be programmed to think like a firefighter.

The result of countless trials, months of testing various scenarios and constant tweaks to the programming is a perfected flow logic system that can predict, react and adapt to essentially any situation fire fighters will encounter.

Developing The Fire Tuck Of The Future

The goal of creating S.A.M. was to minimize the factors that interrupt the fire fighting process and make fire grounds safer and more efficient.

The skilled engineering team at DE Design Works was able to take Jason’s initial concept of a comprehensive fire truck control system, adapt it to the existing equipment standard across the current generation fire trucks and create a new system that represents the single biggest change to fire fighting practices in decades.

And despite early skepticism, the intuitively designed interface that can be easily learned by firefighters across the country has become second nature to the St. Louis firefighters currently deploying S.A.M. on the front lines.

Ready To Make Your Idea A Reality?

TELL US ABOUT YOUR PROJECT